Press Release on Holocaust and Genocides 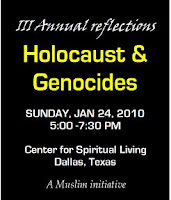 What can you do as individual?
Continue: http://holocaustandgenocides.blogspot.com/2010/01/press-release-on-holocaust-and.html

I first met Robertson in 2003 while researching "Faith in the Halls of Power: How Evangelicals Joined the American Elite." We met over lunch on the campus of CBN and Regent University in a boardroom that featured a portrait of George Washington, wood paneling from floor to ceiling, and enough decorative crown molding to make a Daughter of the American Revolution swoon. A graduate of Yale Law School and the son of a U.S. Senator, Robertson impressed me with his knowledge of topics ranging from international affairs to technology. And under his leadership, the Christian Broadcasting Network (which he founded in 1960) has thrived and continues to expand its reach. Indeed, CBN--along with HBO and Turner Broadcasting--was one of the earliest to adopt satellite technology in distributing television programming around the country in the 1970s.

Very few know such details about Robertson or CBN because he is better known for making or endorsing outrageous statements in the wake of human tragedies like the 9/11 attacks or the Haitian earthquake, attributing them to God's punishment for sinful behavior or, more recently, Haitians' bargaining with the devil in resisting French colonialism. On air, he has suggested that American operatives should assassinate Hugh Chavez of Venezuela and that Israeli Prime Minister Ariel Sharon's stroke was the result of divine punishment for ordering Israel's withdrawal from Gaza back in 2005.

Robertson is a shrewd businessman, and although his 1988 bid for the White House failed early on, he enlisted millions of Americans in what would become a surge of conservative Christian influence in American political life. Why would someone as educated and experienced as Robertson make such outlandish statements? Even if he believes them, isn't he concerned about the backlash of criticism and ill will they generate for CBN and his other ventures?

When tragedies strike, people naturally ask questions about why bad things happen to the innocent. Millions of Americans see the hand of God or the devil at work in natural calamities and world events. In some ways, Robertson simply gives voice to a tendency all believers experience when grappling with the big question of why evil exists in a world made by a loving, powerful God.

I spent hours interviewing Pat Robertson and have dedicated years to studying his work and the wider evangelical world of which he is a part. Only he knows the extent to which he really believes some of his more dramatic pronouncements. But I am confident that he is savvy enough to realize such comments generate attention in the wider world, and they reflect as much his rhetorical flourish and skill in boosting ratings as they do his theology.

D. Michael Lindsay, a sociologist at Rice University, is the author of "Faith in the Halls of Power: How Evangelicals Joined the American Elite" (Oxford).

A few comments:
Posted by Mike Ghouse at 9:53 PM No comments:

Free to criticize religions but not with hate

It is our duty to keep law and order and faithfully guard the safety of every citizen. Hate is one of the many sources of disrupting peace in a society and it is our responsibility to track down the source of such hate and work on mitigating it. We have an obligation to maintain a balance in the society.

My comments follow the article "Free to criticize religions but not with hate" –Mike Ghouse
http://wisdomofreligion.blogspot.com/2010/01/free-to-criticize-religions-but-not.html
~~~-~~~
Posted by Mike Ghouse at 7:08 PM No comments: