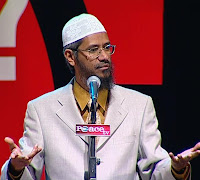 We applaud the Canadian move on banning hate speeches.

It is our duty to keep law and order and faithfully guard the safety of every citizen. Hate is one of the many sources of disrupting the peace in a society and it is our responsibility to track down the source of such hate and work on mitigating it. We have an obligation to maintain a balance in the society. When we are at peace, we can generate peace and we can expect peace around us. Our words and actions should mitigate conflicts and nurture reconciliation and goodwill.

We must stand up and support free speech, but when it messes with the peace of the society, it is “free” no more, it ‘un-frees” people and slaves them to hate. A hate speech can create chaos and fear in the society as much as a man yelling in the crowd “Fire”. The issue must be of law and order.

If in fact Dr. Naik has said this non-sense, “There are many Jews who are good to Muslims, but as a whole, the Koran tells us, as a whole, they will be our staunchest enemy.” We condemn his statement without reservation.

He has a right to free speech, but not malign Islam with non-sense like this statement. Where the heck did he get his Islam from? Does the man understand Islam means peace? Does he understand that God is not prejudiced? It is men like him and a few who worked for the previous administration who chop up God into bits and pieces, your God v. my God.

Who wants a God that hates his own creation, he is reducing God to be his God, a bad guy and not beneficent and merciful God that adorns every chapter in Quraan. He does not get Islam right.

The overwhelming majority of Muslims show respect to all religions as the Prophet did, indeed, Muslims are forbidden to ridicule any religion.

I know I will be rebuked by a few right winger Muslims, so be it, I will not let any idiot make my faith or any one's faith to be misrepresented, and the universal God to be reduced to a God who tells bad things about his own creation? That is not Islam he is preaching. It is time we the moderates speak up and not twiddle our thumbs and let a few men get away from their non-sense.

Canada’s decision to ban Zakir Naik from Toronto conference is good news indeed. And I sincerely hope this will set the precedent to nail all the hate monger’s wearing masks of Islam, Judaism, Christianity, Hinduism and other religions. They are a nuisance; individuals like Gabrielle Bridgette, Wafa Sultan, Ayaan Hirsi Ali, Nonie Derwish, Alan Dershowitz, Rod Parsely, John Hagee, Billy Graham Jr. and a whole lot more need to be analyzed for the hatred they breed. For a briefing on these men and women, please visit the blog: http://hatesermons.blogspot.com/

Mike Ghouse is a speaker, thinker, writer, optimist, educator and an activist of Pluralism, Justice, Islam, India, Peace and Civil Societies. He is a conflict mitigater and a goodwill nurturer offering pluralistic solutions on issues of the day and is a frequent guest on the media. Mike's work is reflected at three websites & twenty two Blogs listed at http://www.mikeghouse.net/

An Indian Muslim televangelist who was banned from Britain last week for “unacceptable behaviour” will not be allowed into Canada to speak at an upcoming conference in Toronto, sources familiar with the situation have told the National Post.

Dr. Zakir Naik, who has said “every Muslim should be a terrorist” and that Jews are “our staunchest enemy,” was to headline next month’s Journey of Faith Conference — which is billed as one of North America’s largest Islamic conferences and is expected to attract upward of 10,000 people.

Dr. Naik, the Mumbai-based founder of Peace TV and a widely respected lecturer in India, has a laundry list of views that could have led to his exclusion from the U.K. and Canada, both of which require an Indian citizen to obtain a visitor visa.

The 44-year-old medical doctor recommends capital punishment for homosexuals and the death penalty for those who abandon Islam as their faith.

He has said that a man is within his right to beat his wife “lightly,” though in a July 2009 YouTube video he cautioned against hitting her on the face or leaving a mark. The “Keep Zakir Naik Out of Canada” Facebook group, which was launched over the weekend, also points out his view that western women make themselves “more susceptible to rape” by wearing revealing clothing.

Among the chief reasons, British Home Secretary Theresa May decided to quash Dr. Naik’s U.K. speaking tour later this month, however, were comments he made in a widely circulated 2007 video.

Tarek Fatah, founder of the Muslim Canadian Congress, said he and the congress have been informed that Dr. Naik will be “stopped at the airport,” and sources familiar with the situation confirmed Dr. Naik does not have a visa to enter Canada.

“We are very happy that government agencies, having been made aware of his statements, have taken this decision,” Mr. Fatah said, adding that he sent a mass email to federal MPs last week, warning them of Dr. Naik’s views. “We certainly don’t want hate-mongers to come here.”
“To me, the rules as to who can come into this country were written for this kind of person,” echoed Bernie Farber, CEO of the Canadian Jewish Congress. “The comments are highly inflammatory, and highly provocative. When you put them together in one cauldron, you have a stew of hatred.”

Dr. Naik, president of the Islamic Research Foundation in Mumbai, was reached via email on Monday but would not comment on his pending visit to Toronto. In fact, Dr. Naik may not yet know that he is unwelcome in Canada, sources said.

In his email to the National Post, Dr. Naik pointed to a June 20 statement regarding the “overzealous and islamophobic exclusion order” issued by the U.K. The statement seeks to clarify his comments, which the foundation argues were “taken out of context.”

The Journey of Faith Conference is chaired by Imam Saed Rageah, whose Toronto mosque, the Abu Huraira Centre, made headlines last fall after a group of young worshippers vanished and were feared to have joined a Somali militant group. Imam Ragaeh declined an interview request yesterday, but passed along a web video via email of Dr. Naik defending his comments and promising to challenge the U.K. ban.

According to the Journey of Faith event website, the “hope” of the July 2-4 conference at the downtown Metro Toronto Convention Centre is for Muslims to “renew their forgotten relationship” with the Quran. As of last night, the site still listed Dr. Naik as a featured speaker.
Citizenship and Immigration Canada declined to comment on the case yesterday, citing the Privacy Act.
=
Posted by Mike Ghouse at 7:03 PM